Be a parent of the great India.. 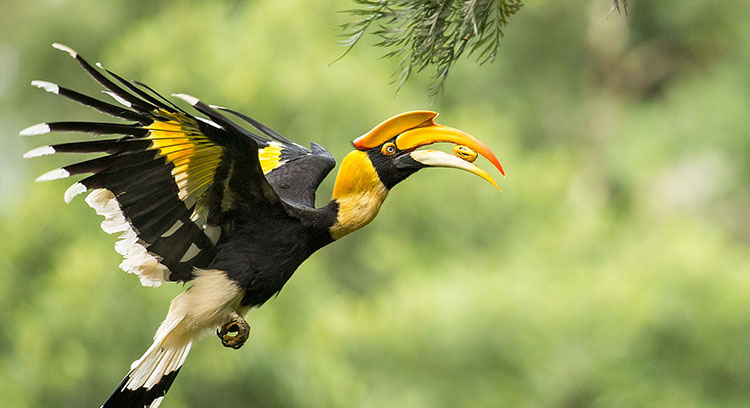 Be a parent of the great Indian hornbill. Adopt their nest.

The great Indian hornbill, also known as the great pied hornbill is the largest spices of Hornbill family. Their population is distributedBhutan, Cambodia, China, India, Indonesia, Laos, Malaysia, Myanmar, Nepal, Thailand and Vietnam. These monogamous birds are slow breeders with a long breeding season which involves intensive parental care for their hatchlings. Usually the bird nests in a long old tree with the existing cavity. The breeding season lasts from March to August.

Hornbills are called as the “farmers of the forests” because they help in afforestation by dispersing the seeds they eat. They mainly feed on fruits, fig being its major source. They also actively hunt small birds, insects, and small mammals. Unfortunately, these spices are listed as “Near Threatened” by the International Union for the conservation of nature(IUCN) due to the pressure faced by the anthropogenic activity. In the North-Eastern part of India, the Nyishi tribes hunt for their casque/ beak and are worn as headgear by males which is considered as the sign of manhood or their tribal identity. Their meat and fat are consumed. While in other parts of Horn bill’s habitat, their population is declining due to deforestation. Human destroys large old trees for expanding their agricultural land and for woods which results in the loss of the Hornbills’ habitat in the forest deliberately.

Nature Conservation Program (NCP) initiated a project Hornbill Nest Adaptation Program(HNAP) in 2011. The program invites volunteers from around the world to adopt a hornbill nest and become a pride parent. This helps in conserving the habitat of Hornbill. One has to make an initial contribution to adopt a hornbill family. The adopted nests are taken care of by the nest protectors who are responsible for supervising the nests. A courteous contribution to save the great Indian hornbill will not only save the nest of slow breeders but also prevents deforestation and killing of the birds.