Foot binding was a symbol of s.. 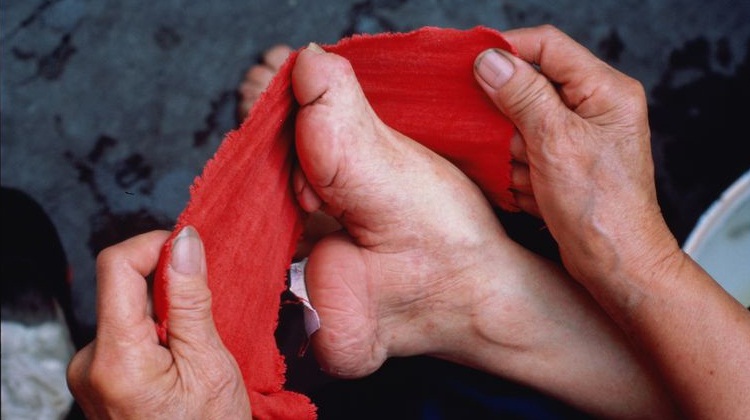 Foot binding was a symbol of status, modesty and moral virtue

A 12th Chinese proverb evident to foot binding says 'if you care for your children, do not worry if your son suffers for his studies or your daughter for her feet'

Foot binding was one of the unique, ancient practices amongst the upper class women in China. It started as a fashionable impulse during the Tang dynasty where one of the emperor’s concubines named Yao Niang performed dance in the court. She entranced the emperor Li Yu dancing on toes in a six-foot golden lotus wrapped in ribbons and precious stones. This practice not only altered the shape of the toes but in addition it produced a sort of confidence in gait especially in the back and thigh muscle. In fact, foot binding inculcates erotic overtones right from the beginning. Gradually, women with money and time from the court took up foot binding making it as a status symbol of the elite crowd.

The young girls of Tang dynasty had their feet bound typically from the age five to eight. Though considered attractive its effects are painful and permanent throughout their lives. Usually, an auspicious day is chosen and prayers are offered to the Tiny-foot goddess who is believed to protect the girls. The older member of the family or a professional foot-binder binds the feet tightly with long strips of cloth, which restricts further growth of the feet and gave the pronounced arc. The aim of this process is to achieve a feet no longer than 3-4 inches, which is also called a “golden lotus”. The smaller the feet, the more attractive it is. However, their mobility is greatly reduced. Smaller feet especially required dainty shoes which are made of silk or cotton beautifully embroidered

Inspired from the Tang dynasty foot binding was widespread in the Song dynasty among the aristocrats. Subsequently, it was practiced by all classes of woman. The lower class parents saw this practice as an opportunity to raise prospects of their own children. Eventually, this became an important trait in arranging marriage for their sons. Girls with the Golden lotus are said to be fortuitous and a reliable bride. It is considered respectful to have a four feet foot, silver lotus however, a foot which is five feet or more is considered to be iron lotuses and are generally dismissed. Henceforth, the marriage prospects of such girls are indeed dim. Hence Foot binding not only symbolized elegance but modesty and moral values.

Emperors in the following dynasty, Chun chi and K’sang Hsi made attempts to ban this practice and never acknowledged foot bounding in their court. It remained unimpressed to the scholars of confucious as it was associated with the woman from the “entertainment industry” and a sole purpose of making woman more attractive. By the 18th century CE, some popular movements have put an end to this practice however still, despite all pain and consequences foot binding was practiced in china into the early 21st century. The last lotus shoe that the company produced was in 1999.

We still have few survivors with the lotus feet. Having unbound their feet for 50-60 long years it is naturally spread. But they have attained the beauty of the society.