Why do boys always have to wea.. 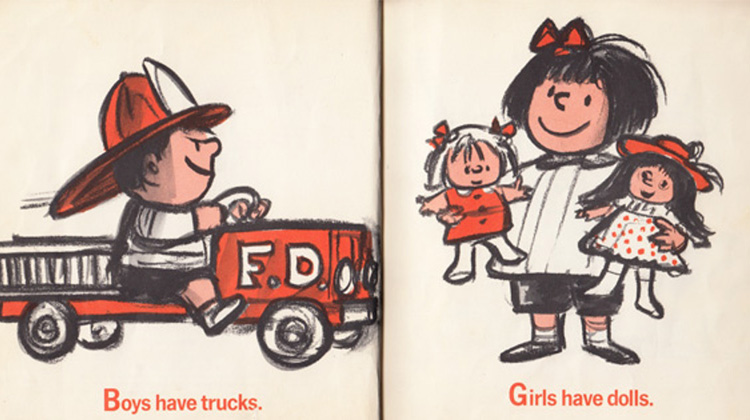 Why do boys always have to wear blue and girls pink?

The ideology of stereotyping in children starts the moment they are out from a cosy womb even before they realize the purpose of life. Excited parents of the newborns rush to baby stores buying stuff in blue if it is a boy and pink if it's a girl. In some cases, few parents manage to know the gender of their babies while they are still unborn and plan things in blue and pink. Sometimes I find it hard to interpret the frenzy notion behind the "blue and pink delusion".

We have been carrying this rational practice of gender bias since the time of ages. Most of us have grown up being exposed to examples of stereotyping like hearing our grandmothers say "Boys don't cry and girls don’t talk loud in the crowd". We don't realize that this way of subjective labeling or branding children at a very young age has negative effects on their behaviors and attitude as they grow into adults.

Stereotyping is an acquired behavior. Children start paying attention to gender differences sooner than expected. Our society continues to contribute a major role in promoting gender bias seemingly in harmless ways which affect the perception of the way a child thinks. Children until the age of four aren't usually aware of gender difference. It is us who acts fugitive in enforcing the practice of stereotyping subconsciously. The negative effects of stereotyping are so strong that it gets strongly registered in young minds.

Stereotyping can take many forms. Race, culture, religion, nationality are the main factors of stereotyping. When children are exposed to stereotyping they become hidebound of their perception and start labeling themselves and others with assumptions. It not only demotivates a child but it also deters a child from being oneself. Sometimes this behavior creates a huge divide between the people.

It is important for every parent to refrain from the practice of stereotyping and start practicing gender sensitizing. Gender sensitizing is a behavioral model that presides over gender sensitivity and teaches children to respect everyone irrespective of social stigma and gender differences. As parents, we have to make smarter choices implementing non-stereotypical behavior in parenting. That way the rally against traditional gender roles becomes a cake walk. Every child desires are different. If your boy likes to experiment his hands on cooking welcoming it makes him grow up to a confident adult creating an identity for himself in the society. Who says boys don’t cook? So are with the girls, encourage if she loves to ride a Harley Davidson.

Stereotyping exists everywhere even in the modern world. Rather than pretending that stereotyping never exists we have to teach our children about them recognize and act accordingly paying respect to one’s belief and culture.